In an old paint box, somewhere in my attic, there is a small, bright yellow button with black lettering on it that states: you gotta have ART. That was the catchy, clever slogan in 1976 for the Detroit Institute of Arts, and to this day, those four words resonate deeply where the arts are the warp and weft of a community’s social tapestry. I cannot think of an attraction where that is truer than at the Southern Vermont Arts Center (SVAC) in Manchester. They have plenty of fine art, they have an abundance of the arts, and, I’ll say it: everything about SVAC oozes talent.

SVAC has been the epicenter of both the arts and art appreciation in the region since 1950. On this venerable estate, the visual arts, performance, creative learning, and the natural beauty that is Vermont have been happily married for decades. It has evolved into a campus with the addition of modern buildings in the late 1900s, but in fact this vast acreage and the 28-room Georgian revival-style mansion was previously the summer getaway of Gilded Age socialite Gertrude A. Devine Webster. It is listed in the National Register of Historic Places.

So much of what is happening at SVAC between April and December this year is because of the creative spark the new director has brought to this nonprofit organization. A resident of nearby Dorset, Elizabeth Paxson assumed the leading role at the center in September 2017. Judi McCormick, president of the Board of Trustees for the past 18 months and an artist herself, says, “Elizabeth’s art world is so much broader than her place at the arts center. It is the way she does everything in her life. Her energy and vision bring so much inspiration to our programs.”

Paxson says, “The first few months that I was here, I spent time at the front desk and it was such an amazing experience to find out exactly what it is that connects the visitors who come here to the arts. I learned so much. One of the things we want to bring to the forefront is that SVAC is a very warm and welcoming place for everyone.”

Art in spectacular settings such as SVAC makes people happy and everyone seems to chat up the one thing they like best about the venue. For many, there’s delight in simply taking that steep, slow drive up and down the hillside on the narrow road that winds through a striking display of outdoor sculptures. Many of the pieces stand stoically unaccompanied in the middle of open fields, land long ago cleared for farming, and many more sculptures stand side-by-side with the birches and pines along the densely forested parts of the lane. It’s enchanting.

As a center of learning, professional artists and talented amateurs come every season to either teach or to take workshops in all mediums. Some students come to study painting, others to learn to sculpt or to dive deeper into fine art photography. More artists come to SVAC by special invitation to be artistsin- residence, setting up their easels in the galleries or in the gardens to work in full view of the public. 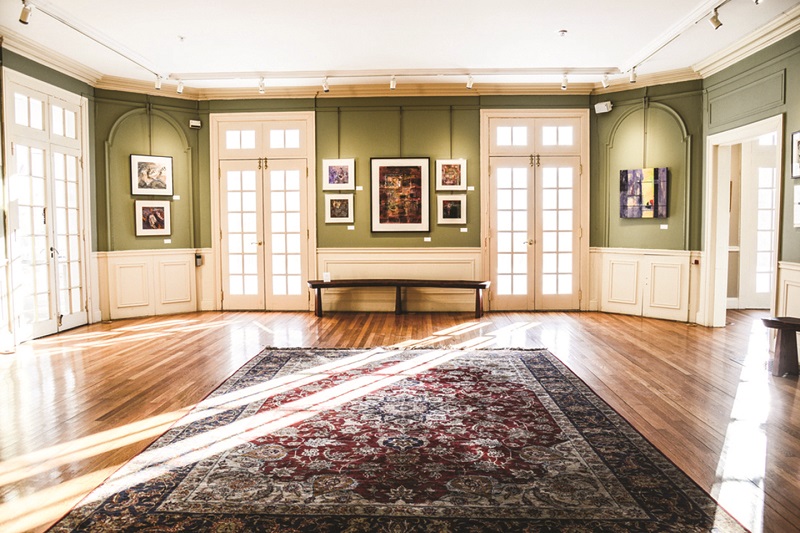 Each summer, thousands of visitors flock to SVAC’s 400-seat Arkell Pavilion to attend a variety of musical genres including a five-week festival of chamber music, opera, and orchestral performances by Manchester Music Festival and on Friday nights, Friday Night Live tribute bands fill the campus with music, music, and more music.

Those who are totally in the know often drive over to SVAC just because it’s noontime. These visitors sit down for lunch at Chie Addington’s and Katsuko Lord’s Café Sora, which serves home-style Japanese cuisine in a pretty, sunlit dining room and on the canopied terrace at Yester House. Insider tip—try the signature dish, Chirashi Donburi, which is an artful presentation of fresh fish served on sushi rice.

No part of the “show” at SVAC is more exciting and more of an attraction than the vibrant, changing art exhibitions and the permanent collections on display in the historic Yester House and the contemporary Wilson Galleries. These are two of the most dynamic art spaces in New England, enhanced by the largest catalog of works by the acclaimed Italian American painter Luigi Lucioni (1900– 1988). Lucioni, who painted in Manchester, is best known for romanticized landscapes of the Vermont countryside, as well as portraiture and still-life paintings.

From now through the end of November, it is another one of SVAC’s typical whirlwind seasons, so don’t miss a day of it. There are 12 spellbinding shows presenting student and teacher art, juried fine art, select solo shows, art glass, nationally recognized photography and film, sculpture, and, surprisingly new this year, “street art” in the form of graffiti. All that and more is packed into six short months, and beautifully curated throughout SVAC’s exhibition halls. •

Moments of Greatness from the Lens of George Kalinsky

This exhibition promises to draw stadiums-full of sports fans as well as camera enthusiasts to SVAC’s galleries. As the official photographer at Madison Square Garden, and during shoots at Radio City Music Hall and at many public events, George Kalinsky was in the right place at the right time to capture people at key moments, whether playing sports or appearing at concerts, shows, or gatherings. Elizabeth Paxson, SVAC’s executive director, says, “Our exhibition this summer focuses on Kalinsky’s array of iconic sports photography. These images capture athletes winning the greatest championship games of their careers, as well as what it was like for them to accept defeat.” Previewing the images, Paxson adds, “Looking at the people in Kalinsky’s photographs, your heart beats faster. There’s adrenaline. You can almost feel the sweat on the athletes’ bodies and share in the intensity of their engagement in their sport at that moment.”

Exhibitions such as this in NYC cause long lines to form around the block. The show in Manchester includes more than 50 of Kalinsky’s extraordinary photographs from intimate 11- by 14-inch portraits to grand, oversize prints in color and in black and white. The sporting events span basketball (from Willis Reed to Patrick Ewing), tennis (Kalinsky photographed the U.S. Open since the days of Arthur Ashe), NHL hockey, boxing (an amazing array of Muhammed Ali imagery), and baseball (back to the days of Jackie Robinson). One reviewer wrote: “These moments in sports are pieces of history many of us relate to and remember.”

Admission is by donation.

Make it a Date

During July and August, no two Friday nights at SVAC will be alike. At Friday Night Live, phenomenal tribute bands rock the foothills of the Taconic Mountains with the chart-topping sounds of Memphis, the Rolling Stones, and Simon and Garfunkel. Some of the best and biggest local bands take the stage as well. Come for the country, blues, and rockabilly performers.

Be surprised, and just come as you are on Friday nights, or follow SVAC’s Facebook page for details. Concertgoers can opt for seats inside or spread their blankets on the grass at the back of Arkell Pavilion. Word is that the Friday night food trucks that line up before the music starts offer delicious, creative menus—first, you eat; then, you rock.